Written by M R TrepScroll down to see more content
Chapter 1 - A Home No Longer
Roger and Mary are forced from their home when zombies discover them
Chapter 2 - Welcome to the Bunker
Roger faces leaving the safety of the bunker in order to help save Mary.
Chapter 3 - Leading the Dead
Followed close behind by the dead, Roger meets a girl.

A block never seemed so long. The icy alley wouldn’t allow Roger to walk as quickly as he’d like, but the zombies kept slipping, making it easy for him to stay ahead.

I have time, Roger thought, looking behind him. Up ahead, a brown, wooden fence prevented the alley from continuing forward, instead, it ran left and right. The dead would follow either route.

“Over the fence, then,” he muttered.

A truck was the only vehicle in the small parking area. Shadows, from the nearby evergreen, swayed back and forth on its white surface.

As good as a ladder, Roger thought, heading towards the pickup.

Stepping onto the rim of the front tire, he grabbed a windshield wiper to help pull himself up. With a snap, Roger found himself falling backward with the broken blade clutched in his hand. An explosion of light filled his vision as his head slammed against the ground.

Don’t pass out… don’t pass out, he admonished himself. The world spun and he couldn’t focus, as if he’d just gotten off The Zipper at K-Days.

They were too close.

Dizziness swayed him as he tried to gain his feet. Not going to happen,. Instead, he crawled towards the truck on his hands and knees and pulled himself upright. Placing his foot on the front bumper, Roger grabbed the top of the fence to pull himself up. He couldn’t. One of the dead had a hold of him.

The zombie pulled on his backpack, biting the top of it, as Roger unclipped the strap and shrugged it from his shoulders. With the sudden lack of resistance, the zombie overbalanced, and Roger heard it fall in much the same way he had a moment before.

He scrambled up the truck’s hood as more dead hands tried for purchase; their bumping and jostling for position prevented them from doing so.

He went over the fence like a toddler attempting a somersault; graceless comedy.

He went over the fence like a toddler attempting a somersault–graceless comedy. And for the second time, in as many minutes, Roger found himself falling. A snowdrift cushioned the blow and cold shocked him as snow traveled down the neck of his shirt. He landed lying partially on his side and felt the blade of his axe digging in there.

Winter, Roger grunted–it would never be a preferred season.

Rolling to his back, he looked up at the clear sky, and took slow, deliberate breaths, trying to calm his hammering heart, preferring not to test the limits of what it can handle.

“I’ll hurt tonight,” he said aloud, then scolded himself as the zombies attacked the fence with added vigor. Whatever, a bird’s fart will have them off in another direction soon enough. He stifled laughter–it was good to be alive.

Crazy, damn world. They were words that popped into his head daily over the past half-year, or so.

He’d never had such a close encounter with the dead. He’s seen them up close, walked roads with them in sight, but never had one grab or almost bite him.

They’d been lucky, him and his wife, living out the first few months after Deadmonton in their home. The shutters on the ground floor, which had been installed to help keep the house cool in the summer, made it possible to do so.

Even when he dragged his wife screaming to the bunker, there’d been no interference from the dead. But now, after this encounter, everything was a tad more real.

Tortoise and the hare, Roger thought. They just keep coming; don’t need a rest, don’t need to recuperate. They continue until you either falter, screw up, or wear down. That’s how they took over Edmonton–the world–slow and steady. Well, except for the beginning, there was nothing slow about them then.

They continue until you either falter, screw up, or wear down.

He turned his thoughts back to the task at hand. He’d have to use bags from the pharmacy now, with dead having claimed his backpack for themselves.

It was the pharmacy that he and Mary used, chosen simply for the name–Crestwood Apothecary–it seemed a spot in a Tolkien village. It was the service, however, that made him a long-term customer. Hopefully, it’d serve him one last time.

Sitting up, he pulled his shirt and jacket up to take a look at his hurt side. If he had landed the other way, he would have been fine; The Woodsman’s Pal had a protective carrying holster, his other axe didn’t, the handle of which he simply slid between his belt and pants. When falling, the blade had cut into his side. Not severely, just a shallow gash a few inches long, but enough to be of concern–couldn’t see a doctor if it became infected. He mentally added disinfectant to the shopping list. For now, he held a handful of snow against the wound to both soothe and clean it.

No more wasting time, Roger thought. He left the axe by the fence so it wouldn’t rub and irritate the wound further, and took a look around. To his left was the West 43rd condos, with the Valleyview Condominiums on his right. Directly ahead was 96th Ave. Cross that and he’d be at Crestwood Centre, where the pharmacy was located. A two-minute walk, if that. 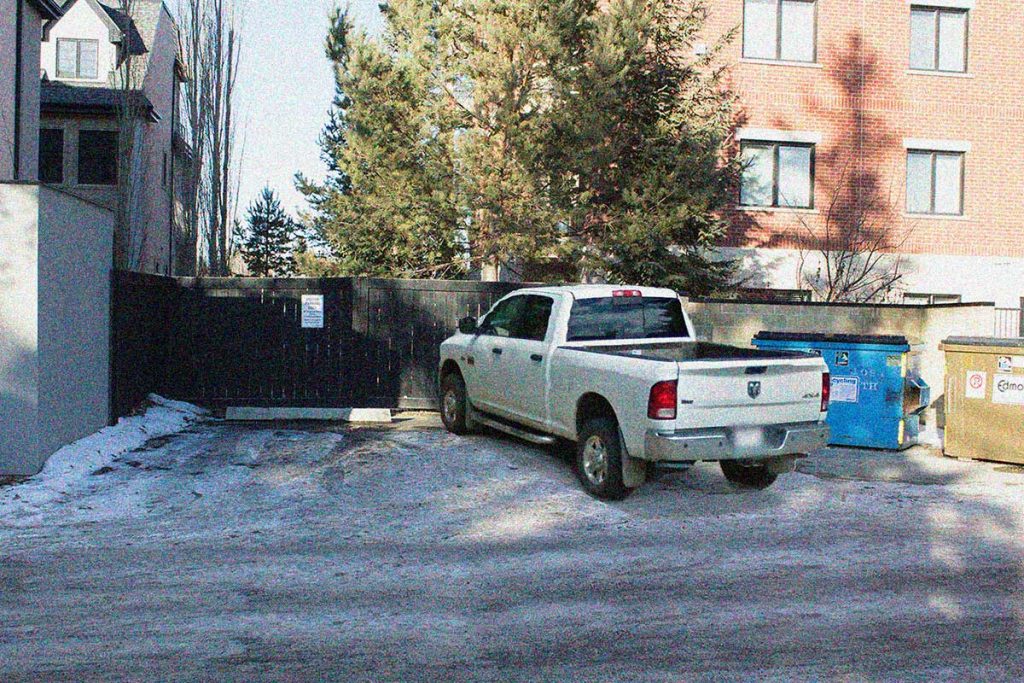 Not bad, he thought, only almost died once. He smiled, then thought of the axe, and how if he had been wearing something a little thinner, it probably would have gone right into him. But it didn’t; couldn’t really add that to his near-death count. Perhaps he’d embellish a little when he told Mary.

Eyes set on the pharmacy, Roger preceded forward, passing between the condominiums. It wasn’t until the zombie stepped out from around the stairs on his left that he knew it was there.

As the zombie lurched forward, Roger grabbed at the Woodsman’s Pal, forgetting to unsnap the carrying holster. He frantically tugged harder; once, twice. Too late… too late, he thought, as the teeth drew nearer.

Backpedaling, he tripped and landed beside the cement steps. The zombie came with him. Roger pushed its head back to keep the things teeth away. The bulk of the zombie lay on top of him, and it made for a lot of bulk; Roger doubted it was much healthier in life than it was in death.

He couldn’t wiggle free while fighting off the zombie’s attack, and the Woodsman’s Pal was pinned between him and the girth of the dead thing moving on top of him.

“No, no, no, no, no,” Roger repeated–Mary at the forefront of his mind. His arms were weakening, and water kept dripping on his forehead and running into his right eye; an added annoyance he could do without. Angling his head away from the drips, light reflected in his eye.

What is that? He squinted up to find icicles lining the railing of the stairs like stalactites at the mouth of a cave. A drop of water landed in his eye. He blinked it away, where it ran down his cheek like a tear.

Roger braced his left arm against the zombie’s neck, pushing forward as he reached up. He missed the icicles, wasn’t even sure how close he was to reaching them. He dropped back, using both hands to push against the zombie again, his right slid a little in the sloughing flesh of its neck.

This is it, he thought. With strength ebbing, it would be his last try. Taking several quick, shallow breaths, he counted off.

“One.” “Two.” “Three!” Roger pushed back as hard as he could and swiped out at the railing. The tip of his finger met the tips of two icicles. One snapped off, rotating as it fell, and smashed against the cement of the stairs. The other came straight down, leaving a cold, stinging trail across his ear as it landed in the snow beside him.

He frantically grabbed for the length of the impromptu weapon, snatched it up, and rammed it forward.

“Turn it, you fool!” Roger yelled as the fat, blunt end of the icicle smacked the zombie in the eye with a sickening squelch sound.

The zombie began to move closer, its jaw snapping open and closed. Roger could no longer hold it away with just one arm. Turning his head to the side, he moved the blunt end of the weapon against his cheekbone and let the zombie move towards him.

It lunged forward; teeth clamping closed an inch from Roger’s flesh. A moment later, cold gore ran over his fingers and pooled on the warmth of his cheek as the zombie came to rest on top of him. The icicle was embedded deep within its brain, having entered through an eye socket.

Roger didn’t know whether to laugh or cry, instead, he vomited. His heart was triple-hammering away again. He jerked and twisted under the twice-dead body and worked himself free. Gaining his hands and knees, he crawled three feet away before collapsing. It felt like his body was coming apart–heart pounding, stomach wretching, body trembling with adrenaline–but beneath that, was the euphoria of being alive.

It took much longer this time, but his heart eventually slowed to somewhat normal.

Winter, Roger thought, with a new appreciation. Had it been summer, he’d be dead now. Three near-death experiences in less than ten minutes–two zombies and an icicle–probably no need to exaggerate the tale to Mary now.

He shook as he stood, exhausted by the last few minutes.

“No rest for the weary,” he said. Or was it, no rest for the wicked? He couldn’t quite remember, not that it really mattered. He walked to the edge of the Valleyview condominiums and peered cautiously up and down 96th Avenue, not wanting to be surprised by another zombie, or worse, a group of them. Check both ways before crossing the street. It seemed more important now than when the city was alive.

Chapter 5 - Hope Found
Roger finds a body that reveals a secret.
Final Chapter - Creating an Illusion
Roger must decide what's best for himself and Mary.

Within a few blocks, Roger almost dies three times. And he still has to return back to the bunker.

Mary probably has pneumonia, which forces her husband, Roger, to leave the safety of the bunker in search of medicine. 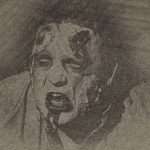 This zombie leaves Roger appreciating winter for the first time.