Written by M R TrepScroll down to see more content
Chapter 1 - A Home No Longer
Roger and Mary are forced from their home when zombies discover them
Chapter 2 - Welcome to the Bunker
Roger faces leaving the safety of the bunker in order to help save Mary.
Chapter 3 - Leading the Dead
Followed close behind by the dead, Roger meets a girl.
Chapter 4 - Old Man, Wintered
Roger quickly learns just how precarious a stroll along Deadmonton's streets can be.

Crestwood Centre. It appeared as busy as a normal weekday, with the lot full of varying makes and brands of vehicles. But closer scrutiny showed erratic hastiness–cars angled this way and that, some partially taking up four different stalls, bumpers resting against dented fenders. The helter-skelter of it demanded noise, shouting, chaos–the silence overwhelmed.

What happened here? Roger wondered. They obviously arrived with a plan, so why’d they leave without their vehicles? He looked around for any signs of the dead. He was alone. Just him, his thoughts, and the empty shells of the vehicles, whose colors were fading under the greyish-beige dust.

Every place Roger looked, nostalgia hit at him like a villain in a Batman comic book: Café Blackbird–his and Mary’s little coffee spot (jab!), the Toronto Dominion Bank–which had financed their cars and house and holds their investments (biff!), CareIt Urban Deli–lunch stop when on their walks (bam!), Allegro Italian Kitchen–Mary’s favorite place to dine, Deluxe Burger Bar–his favorite (paff!). Each memory of Crestwood Centre was like a little jab that added up to one big haymaker that almost brought Roger to his knees. (kaPOW!) 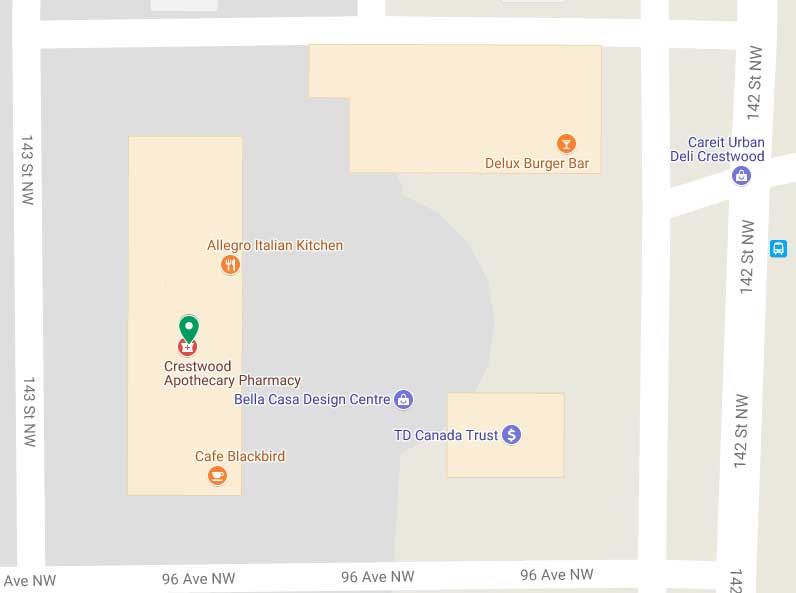 Roger’s and Mary’s special spots of Crestwood Centre and the Crestwood Apthecary.

The initial hit landed as he crossed 96th avenue. Café Blackbird resided on the corner, where the aroma of coffee would wander out to welcome you inside. Today, there was only the scent of decay, which made the Blackbird as welcoming as anywhere else in the city–just another spot that died along with Edmonton. Its shattered windows didn’t bode well for the Apothecary.

Over the years, he and Mary had visited just about all the shops and restaurants of Crestwood Centre. It was their place–a little spot of living within Crestwood. How he wished to stroll it one last time with Mary; buy a knickknack for the living room, have a not-too-real argument about where to eat, then pick up a bottle of wine to enjoy in front of the fire at the end of the day.

So much lost in a couple of years. Roger sighed. He still had Mary though, her illness may have robbed her of the decades they had spent together, but he still had all of the memories with each other to draw upon. That, and being able to look across a room and see her, made life worth the struggle.

He passed the door for the Bella Casa Design Centre. Its door and windows were intact, but the sidewalk in front of the pharmacy was covered in shattered glass. The steel lattice security curtain, or whatever they called such a thing, installed behind the window, was worked free and bent back enough that a person could squeeze by. As long as that person was on the thinner side, Roger doubted there were too many of the stout kind left.

Before entering, Roger noted a couple of zombies off in the distance, but they weren’t close enough to be of concern and didn’t appear to be coming his way. The more immediate concern was what was on the other side of the bent security curtain; he could smell the decay wafting out through the hole in the broken window, but there were no accompanying sounds of anything moving around.

The interior of the pharmacy was lost to him; heavy drapes made it impossible to see inside. Roger tapped on the glass and listened carefully. Everything was still, but his heart sped up anyway as he stepped into the apothecary.

As he pushed the drapes aside he gagged heavily. The smell of rot was overwhelming, reminding him of the Muttart Conservatory. He went with Mary one year after reading in the Edmonton Journal that the Corpse Flower was in bloom, which was billed as smelling like “rotting flesh.” With the rise of Deadmonton, Roger had the knowledge to concur. It was as if Edmonton was now the greenhouse, growing corpse flowers by the hundreds of thousands, only these walked, ate, and killed.

Mary had lasted longer in the conservatory than he had, but they both excited running. They had stood by the door, gulping in clean air and laughing, perhaps out the absurdity of paying money to almost make themselves sick. There was no door leading to a comfortable reality, now, though.

Roger gave himself a moment, breathing through his mouth to try and get around the pungent air, then entered the Crestwood Apothecary.

The person responsible, or so Roger assumed, for his easy entrance to the store was dead. Truly dead. She sat with shelves of medicine standing by, openly showing their contents and seemed to be saying to the woman, “try these!”. On the wall, above the shelves, “PRESCRIPTIONS” was written in a large font.

Scattered bottles of rubbing alcohol surrounded her, adding the look of a hobo on a binger to her slumped over posture. Bandages were wrapped tightly around her right bicep and thigh. She hadn’t finished changing the bandage on her left forearm, the old blood-encrusted one was only half removed and the missing flesh of the exposed wound told a tale. Roger assumed the other bandages wrapped further bite marks, which meant she was attacked and bitten by zombies yet she hadn’t turned. The whole scenario lent truth to the rumors of possible immunity, as well as concern for his plan “B”, should it be required–what if Mary were immune too?

Possible immunity. It was talked about, but no proof was ever provided. In the beginning, it was one “expert” trying to position their theory over another’s. Grabbing for a few minutes in the spotlight or creating a catchphrase to win the next day’s headline. After a continuing parade of one expert providing their findings while another expert disputed those findings the next day, it became apparent that no one really knew what was behind the animated corpses. The illusion of life, was how one of them described the walking dead, that seemed to fit as well as any other description and it was what stuck with Roger: The illusion of life.

Possible immunity. It was talked about, but no proof was ever provided.

He found a smock hanging behind the counter and covered the woman with it. Perhaps, with the immunity thing, humans wouldn’t become extinct after all, at least not until there were enough of them again to find a way to blow up the world. In his mind, Mary was shaking her head at him, the way she always did when he served up such pessimism.

Roger searched the pharmacy, including the desks and offices of the staff, looking for items on his list. A younger version of himself may have found some fun in the looting, knowing no repercussions were forthcoming, but he felt uncomfortable, guilty even, as he invaded the privacy of people who had been nothing but helpful towards him.

Having found a drug guide, Roger couldn’t make sense of how it was organized. Instead, he looked up a drug he knew, Ciprofloxacin. He had read an article about how prolonged use could cause tendon issues, which was the main point of the article, but it also mentioned that is was used to treat many bacterial infections, even some forms of plague. The drug guide confirmed these points. If it was strong enough for something like that, then it should be enough for what ails Mary. He searched the shelves until he found the drug.

“She can’t take these,” Roger said. Another look at the guide showed that it came in a suspension form–getting liquid into her would be much easier than coaxing her to take those horse pills. Another search provided three of the oral suspension kits. He took them all and put them in a plastic bag found near the cash register, which already contained bottles of extra-strength Advil, peroxide, and alcohol to clean his own wounds, along with sterile dressing and tape. He also grabbed a bunch of syringes–once mixed, the antibiotic needed to be refrigerated, something the bunker didn’t have the luxury of, so he couldn’t reconstitute one full bottle at a time, instead, he’d have to prepare one dose at a time. Which meant they wouldn’t be exact, but he figured he’d be able to get the dose close enough.

Roger hurried, he wanted Mary to have the drug as soon as possible, and the encounters with the zombies, plus the subsequent time to recover, had caused a delay he hadn’t anticipated. He took a quick drink from the distilled water he found in the contact lens aisle, then headed back to the window.

...his encounters with the zombies and the subsequent time to recover had caused a delay he hadn’t anticipated.

Squeezing through the opening of the security gate, and back through the broken window, Roger could hear noise coming from up the street. Before he could look to see what was happening, the plastic bag caught on a jagged piece of glass, tearing a hole in the side. A couple of needle-topped syringes fell out, landing on the sidewalk.

No big deal, Roger thought as he picked them up. He slid the syringes into this pocket and turned back towards the bunker. Back to Mary. And with a clear view across the street, Roger saw the cause of the noises he had noticed.

And they saw him.

Final Chapter - Creating an Illusion
Roger must decide what's best for himself and Mary.

~ Chapter Six ~
Be the first to leave a comment!